Family takes over clinical trials in Newport News and Norfolk 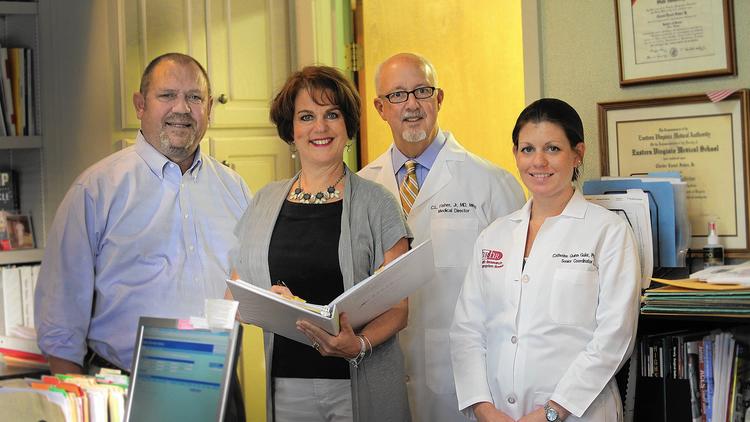 The Quinn family has found its metier in conducting clinical trials for drug development. Rita Quinn, a retail pharmacist, and her husband, Ted, bought Health Research of Hampton Roads, the Peninsula’s only independent research lab, in 2013. This month, they completed purchase of its Norfolk counterpart, National Clinical Research.

“You can literally save people’s lives. This is what it takes to get a drug into a pharmacy,” said Ted, outlining the multi-tiered clinical trials process overseen by the Food and Drug Administration to determine the safety and efficacy of all new medications.

Their daughter, Catherine Gular, also a pharmacist, joined the Quinns 18 months ago as vice president of clinical services. For Ted, Catherine’s involvement is a dream come true. “It’s the greatest thing ever to come to work and her be here. We work really well together,” said Ted, who runs the non-clinical side of the business.

As a PhD student, Gular interned with the lab’s founder and former owner, Chester L. “Tim” Fisher, a physician who is still medical director for Health Research of Hampton Roads.

At any one time, the center is involved in eight to 10 studies using volunteer patients for a variety of drug trials.

Many are what Gular tags as “soft” issues, ones that are a nuisance rather than life-threatening. As an independent operation, the lab doesn’t participate in cancer research, typically the province of large hospital systems. “We do what we’re good at,” said Ted, listing multiple studies in osteoarthritis, COPD (a lung disease), constipation, skin issues, birth control and HIV. “We turn down eight or nine for every 10 we get,” he added, crediting Fisher with setting up a pipeline to drug company and research sponsors over the past two decades.

The Norfolk center conducts complementary studies, such as on hypertension, diabetes and cholesterol. Each lab will continue to work independently and follow its established strengths, Ted said.

“The protocol is given to us, like a recipe book. It dictates exactly what needs to be done and who can be a volunteer,” said Rita.

They rely on advertising to get the word out to potential participants; about 50 percent of applicants for each trial qualify and are selected, said Ted. They are drawn from all over the region, from Gloucester and Williamsburg to Norfolk, and sometimes further afield. Many are return patients from the lab’s database of more than 4,000.

Susan Koczyk of Yorktown responded to a newspaper ad. When her doctor didn’t object, she signed up and has volunteered for half a dozen trials in the past few years, most for COPD and one for osteoarthritis. Her reasons for participating are typical of most, a mix of altruism and self-interest, helping others and receiving free medical care. “For one thing, COPD medication is expensive. They provide the meds and I make good money, usually around $800. On the last day of the study they give you a check,” she said, adding, “You do feel like you’re helping other people, too.”

Margaret Powers, 82, a former medical worker, has participated in multiple studies over the past eight years. The Hampton resident believes the studies are very beneficial to future use, crediting new COPD medication with helping her daughter. She also described the reimbursement for time and travel as “very rewarding.”

Koczyk’s current study is for the improvement of an existing medication, she said, explaining that it has already been tested for safety on healthy subjects. “They have to show that it works exponentially better. “You’re doing something for the greater good,” said Gular.

Ted concurred. “It’s such a noble thing to be a volunteer in a drug study and potentially help others,” he said, citing Lipitor as one of the well-known drugs whose development involved local participants under the direction of Fisher.

Sometimes the new medication works so well that patients want to keep using it. In one instance, Koczyk, now 73, said she couldn’t wait for the medication to reach the market, which can take a year or more. Occasionally, the lab can obtain an extension for patients to allow them to continue using a successful drug before final approval, a process that involves multiple safeguards, said Gular.

One of the major differences for the physicians and patients in a research study is that insurance is not a factor. Everything — medication, lab work, EKGs, doctor visits — is paid for by the trial’s sponsor, so no-one ever asks for an insurance card. “Patients don’t need it. It’s not talked about in research,” said Gular, who emphasizes other benefits, such as extensive follow-up, education and compliance checks. “It teaches good medicine behavior. They’re getting the attention that they don’t get from other providers. Once we get a patient here they don’t want to leave,” she said.

Fisher emphasized that patient safety is a top concern. “The medical care is all related to the individual study,” he said. The in-depth screenings, which often include diagnostic testing not covered by insurance, may unearth other underlying health issues. Patients are then referred out to appropriate providers. “We have no interest in taking over patients,” he said.

Fisher, who is board-certified in occupational and preventive medicine, describes the system as a win/win for all involved. “When we bring a new product to market, then it helps existing medications meet the generic threshold, thereby lowering the price,” he said.

Currently he’s particularly enthused about a highly anticipated injectable drug for eczema. “The more anticipated, the more I watch the safety side,” Fisher noted.

Want to join a clinical trial?

Different studies require different levels of participation. Patients receive regular health care and lab testing and are reimbursed for costs and travel on completion of the study.

To advance the health of our local, national and international communities by promoting the development of improved medical therapies through the professionally superior conduct of safe and ethically sound human research studies.

If treatment for your disease isn't available or if the standard treatment hasn't worked for you, you might consider a clinical trial. Clinical trials can provide access to new or experimental treatments that otherwise aren't available. Clinical trials offer hope for many people and an opportunity to help researchers find better treatments for people in the future. Contact Health Research of Hampton Roads and enroll in a Clinical Trial today.